Posted at 13:49h in Uncategorized by EnriqueLara 0 Comments
0 Likes

October’s Visa Bulletin kicks off the start of the new fiscal year for the U.S. federal government, which means new batches of visas will be made available on October 1, 2019 for all green card categories.

We normally expect to see forward movement in many visa categories in the October Visa Bulletin, and this year did not disappoint.

The big news for October 2019 is that USCIS has allowed Dates for Filing for Employment Based immigrant visas!

Based on USCIS Dates for Filing, if you have a priority date for an Employment Based visa petition that is before the dates indicated by USCIS, and you are living lawfully in the U.S., you likely qualify to file I-485 Adjustment of Status during the month of October 2019.

If you believe you may qualify, now is the time to contact your immigration attorney to begin review and preparation of this process. 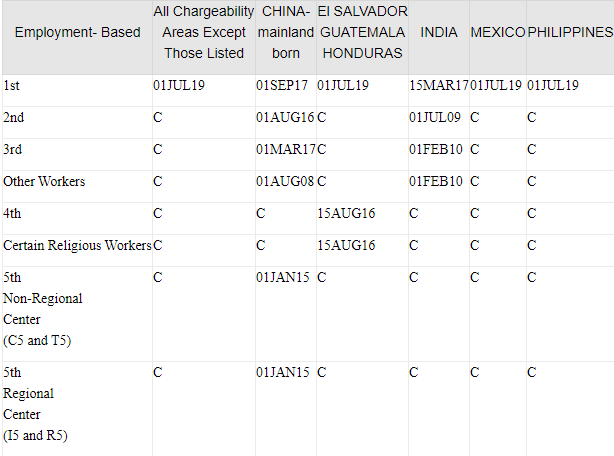 Donoso & Associates, a leading immigration law firm based in Washington, D.C., will continue to report on developments regarding the immigration law and policy through our news section of donosolaw.com.

I.A. Donoso & Associates provide assistance with review and advice regarding eligibility for visas to the U.S. or Canada.